I wanted to share a few personal posts so my readers can get to know me better! I am in the midst of planning my wedding to my fiancé Nemanja. We are only in the early planning stages but we have a good idea of what we want now after lots of research! We still don’t have our date set but we are planning for September next year. Hopefully we can lock that in soon so the real planning can get under way as my Pinterest is overflowing with ideas! Since I plan to post about about our journey leading up to walking down the aisle, I thought it fitting to share how we got engaged! If any of my friends are reading this feel free to skip this post as I’m sure you are sick of this story! For anyone that doesn’t know me so well, I hope this gives you a little insight into one of the most special moments of my life!

We met nearly six years ago in Dublin where we were both living at the time. I don’t think either of us were looking for anything serious, I was just out of a relationship and he had been enjoying being notoriously single for the last year. I was wary of going on a date so soon after a breakup but my friend convinced me I needed a rebound, well that didn’t exactly go to plan! I have heard people say when you meet the right person it just clicks but I always thought that was just in the movies! Soppy I know but I fell for him fast!

The topic of marriage had come up plenty of times over the years but mostly as hypothetical scenarios of ‘when we are married and have a house with 2.5 kids’ kind of thing. I always thought he was the person I would marry but as we were both fairly young when we met we didn’t feel the need to rush. The last year had been a tough one for me health wise and Nemanja was my rock. This really solidified that he was in it for the long haul. I wasn’t always easy to deal with as being in pain and stressing all the time takes its toll. I know he was worrying about the situation too and he was extremely busy in work so we had a hectic time. He stepped up and supported me when I needed him most.

In November last year Nemanja got a new job. He still had some holidays left to take in his current job, so he booked us a last minute trip to Mexico! I was so excited! We booked flights on a Friday and were on a flight the following Thursday! I usually plan months ahead of trips and do loads of research but we literally turned up not knowing much about our resort but it was perfect. We stayed in the Sensimar Seaside Suites which is between Playa Del Carmen and Tulum. Just look at that beach!!

Once we settled into our room we visited our concierge and booked in some dinner reservations for the week. We had gone for an all inclusive package so all the restaurants were free but some you had to book in advance. We also booked a couples candlelit dinner one evening which was an extra cost but we decided to treat ourselves. A few days after the candlelit dinner, Nemo (that’s his nickname by the way, it’s so much quicker to type!) said he had organised another dinner later in the trip too as he wanted to thank me for helping him prepare for his interviews. He had been so focussed on interview prep and applications we hadn’t had much time together so I was delighted at his gesture.

He had me totally fooled that is was a thank you dinner! He is a romantic guy so I didn’t think much into it, it seemed like a lovely way to celebrate all his hard work and to celebrate his new job with some quality time together! The night of the dinner he had organised rolled around, we had three days left of our trip and were so relaxed after an amazing week and a half. We were picked up at our room and driven to the beach in a golf buggy which was great fun. Turns out when he told me to go out and he would lock up the room, he was getting the ring! Apparently it was in his back pocket so he couldn’t sit down fully and he was half hovering the whole time! Lucky for him, I didn’t notice as I was loving the view of the resort.

When we arrived to the beach there were lanterns lighting the way to a private gazebo where dinner was set up. I couldn’t help but get a photo it was so beautiful. He must have slipped the ring box to our waiter who greeted us so he could sit down properly for dinner! He had preordered all the food so I hadn’t a clue what we were having. It was really lovely each course being a surprise! He had ordered some of my favourite things, coconut prawns and lobster! He also had my favourite rose champagne so I was in food and drink heaven! We had such a lovely evening reflecting on our trip and laughing about the excursions we had been on, in the days prior. He was SO relaxed and the conversation flowed like the champagne! 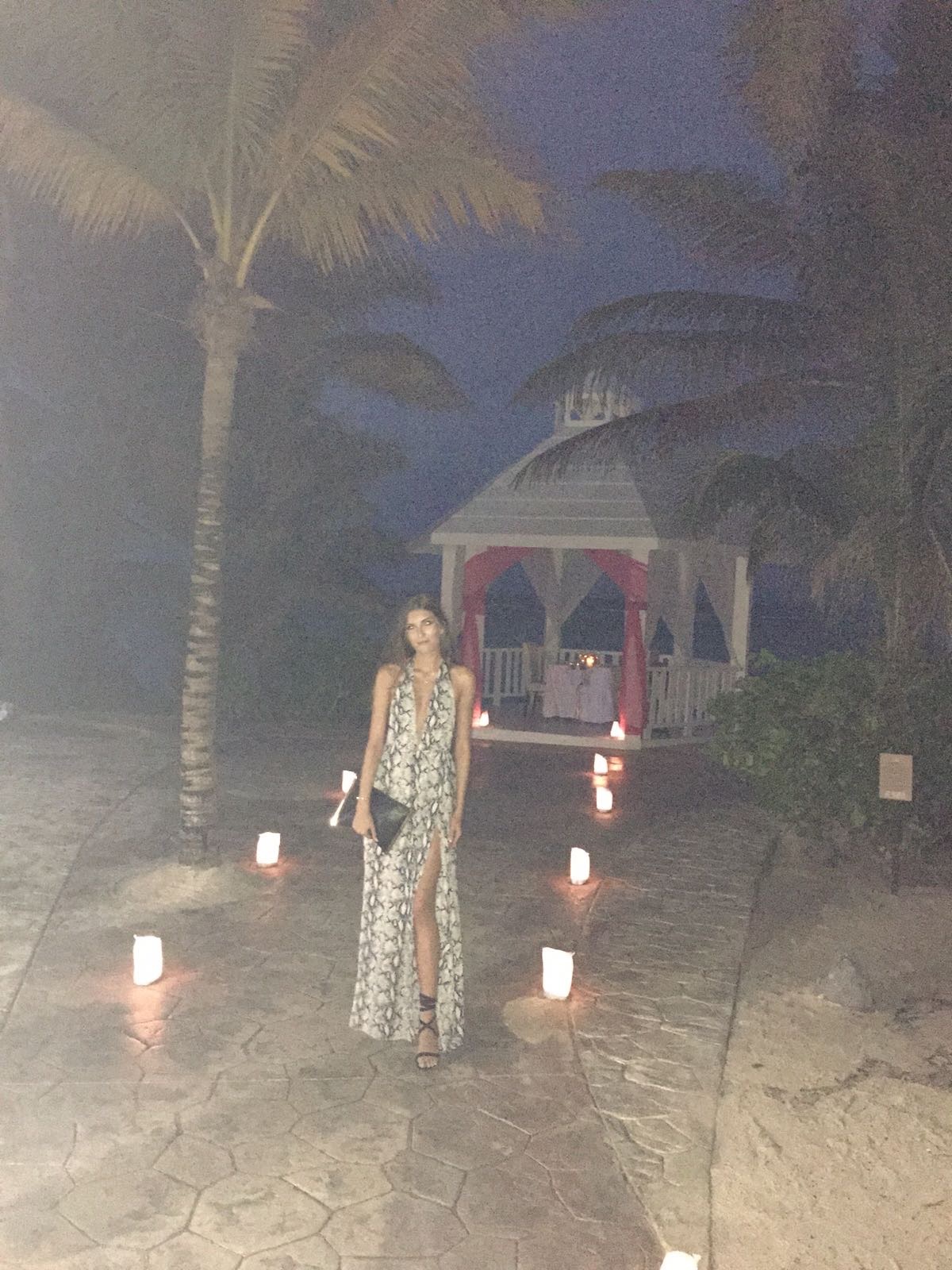 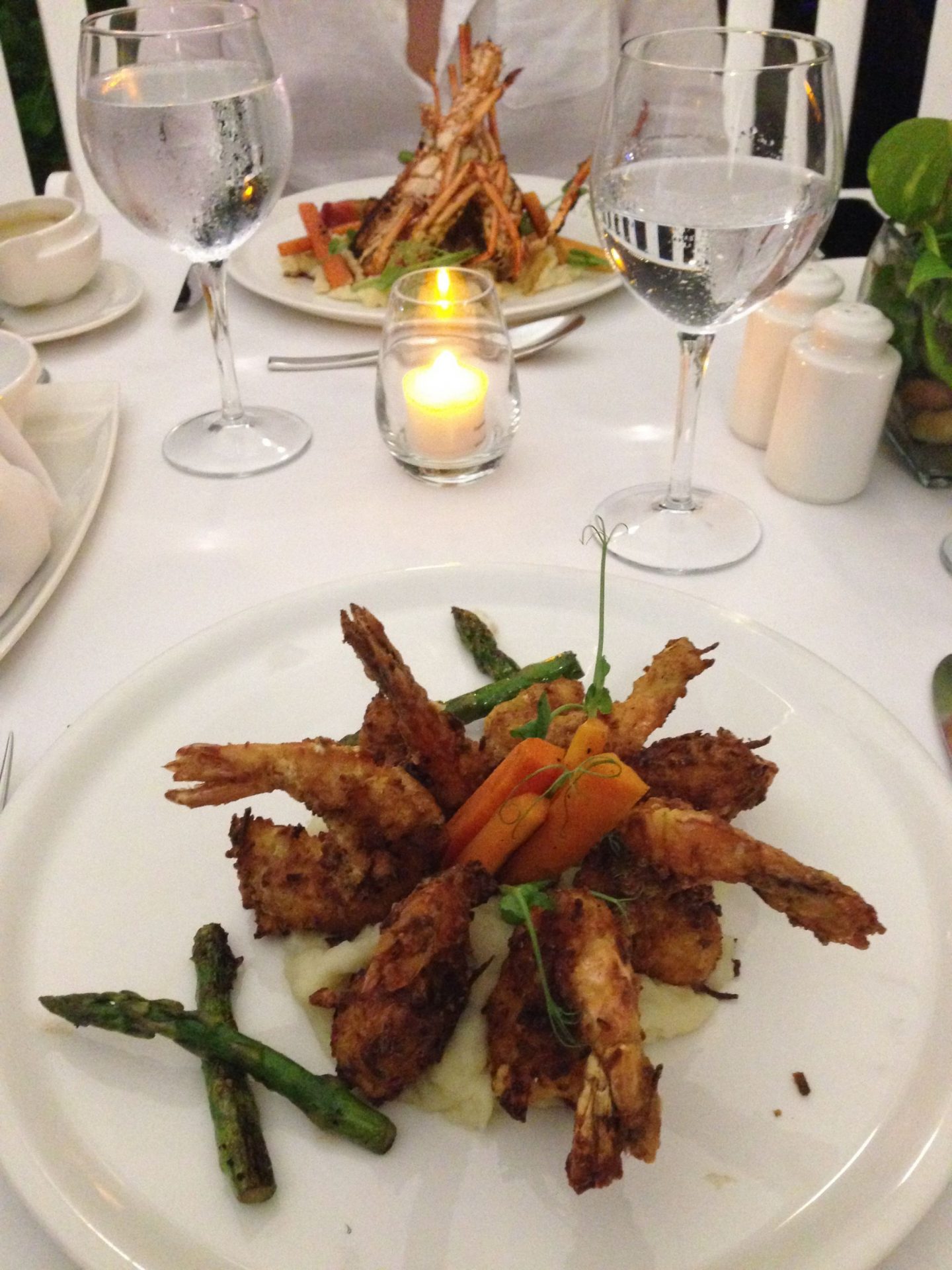 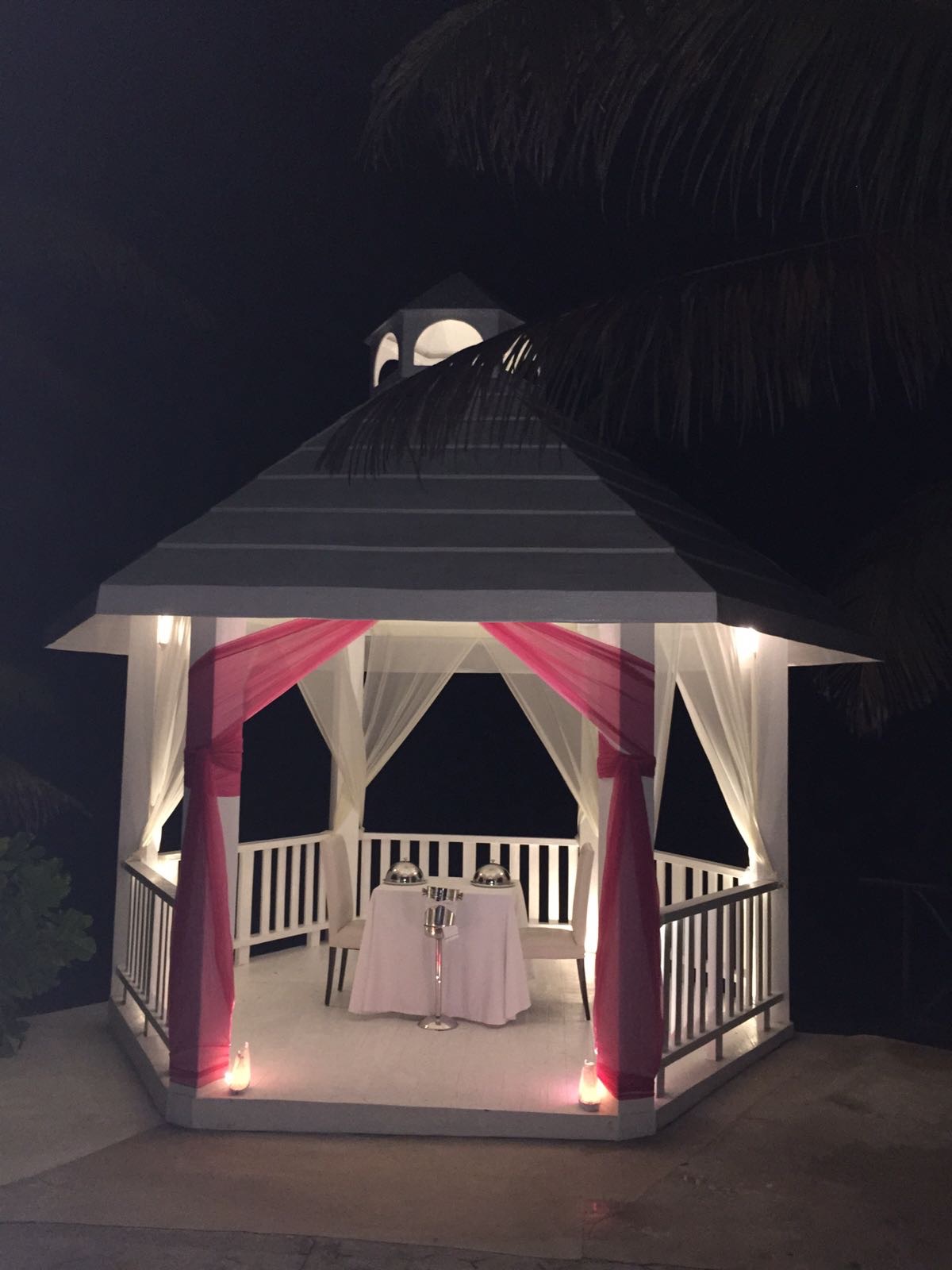 Each course, our plates were brought out with metal covers, you know the fancy ones that keep your food hot and they lift to reveal what’s underneath. I think its official name is a cloche. Anyway after dessert was cleared another plate arrived at the table. There I was thinking they were bringing those little aperitif shots you get after a meal. Nemo lifted the cloche and I nearly fell off my chair when I saw a ring box underneath! Next thing I know he is down on one knee with a diamond ring. I burst out crying when I realised what was happening! When I said YES, sprinkler fireworks went off in the inside of the gazebo all around us. I am obsessed with fireworks so this was such a sweet touch. 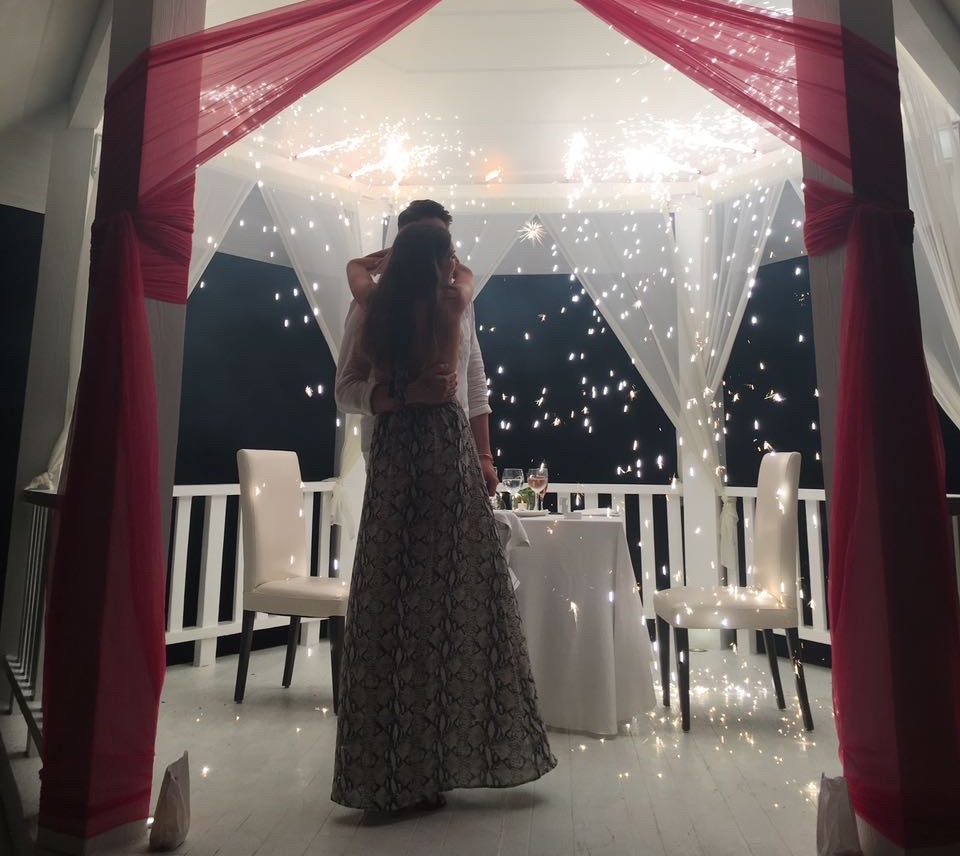 It was the best surprise I have ever had and I am so glad I was genuinely shocked. We went back to our room to find the hotel staff had decorated the bed with towel swans in the shape of a heart and filled the jacuzzi with flowers. They also brought us champagne to toast with, they really went the extra mile to make our evening so special. Mexico is six hours behind the UK and Ireland so all of our friends and family were asleep by the time we tried to call them! I sent some of my friends photos, and we just relaxed together. The following morning we woke up early to lots of messages and made phone calls to our families. We had planned to go scuba diving so that was an amazing way to celebrate! We spent our last few days in a love bubble before we came home. We flew back to London for a week of work, then back to Dublin for Christmas. It was perfect timing to celebrate with our families and friends over the holidays. Since he did such a great job on the proposal I think Nemo should just plan the whole wedding now! 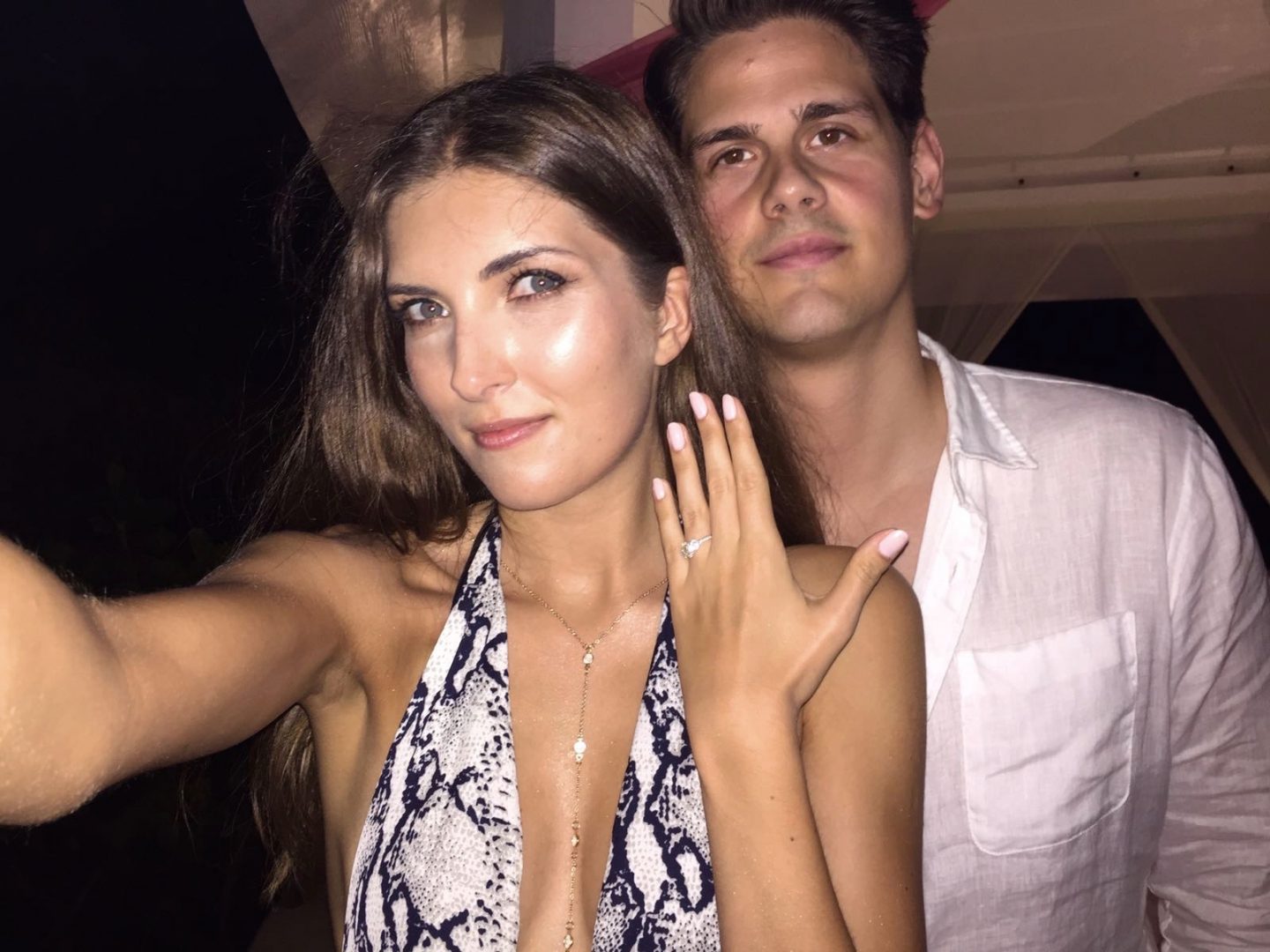